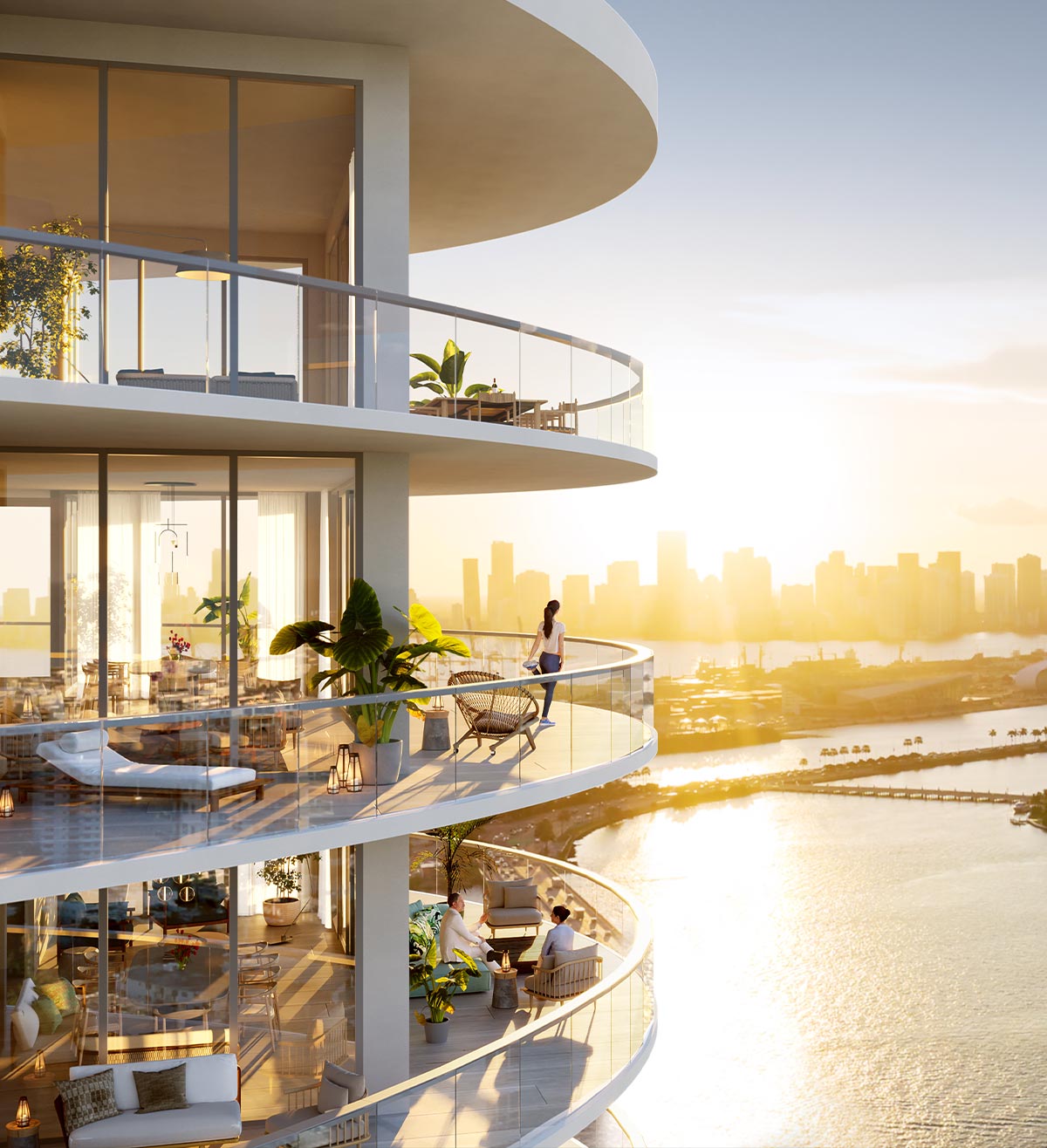 Like so many industries across the world, real estate has seen a tremendous shift since the start of the COVID-19 pandemic. More than two years in, the market is still reeling. Remote work is making people rethink where they can (and want to) live, while inventory remains frustratingly low for homebuyers at every price point. One of the busiest markets has to be South Florida, which is receiving a migration of diverse groups from nearly every point in the United States.

“There has been an influx of professionals of all ages and industries moving to South Florida,” says Cathy Strafaci, executive vice president and managing director of Douglas Elliman development marketing. “There has also been an overarching trend of those who once visited Miami seasonally now making the city their year-round home.”

Strafaci looks at Miami’s globally influenced, vibrant culture as a beacon for people from all over the world because it’s a one-of-a-kind place to settle. She describes her buyers as savvy, educated, well-traveled and successful individuals with discerning tastes that extend across all facets of their life.

Here to meet the needs of this esteemed group of newcomers is Five Park, a stunner of a luxury community merging function, beauty and sustainability. Not only are the residences rich in amenities, state-of-the-art technology and sumptuous finishes, but the property also encompasses so much more than the living spaces. This includes Canopy Park, three acres of lush greenery that honor Florida’s exceptional ecosystem. It’s a feature that sets Five Park apart from other prominent developments. When one thinks of new construction, it’s rare to see so much attention paid to showcasing nature, but it’s just another example of how its visionaries really thought of everything.

“From the onset of the project, Five Park’s mission has been to create an entirely new Miami Beach lifestyle, one that prioritizes residents’ ability to balance well-being and productivity within their own community, and the addition of Canopy Park does just that,” says Russell Galbut of TCH 500 Alton LLC, developers of the property.

However, Galbut and his team weren’t merely thinking of the human component when they designed the space. They also want to protect the health of the land.

“We integrated groundbreaking sustainability and environmental resiliency efforts into the foundation and landscape of the area that will offset flooding in this traditionally watershed neighborhood,” he says. “This will, in turn, protect our precious Biscayne Bay because the water captured by Canopy Park will be filtered through a sophisticated system installed underground, ensuring that harmful toxins, pollutants and debris are removed before it’s safely reused to maintain the native and exotic canopy of trees and plants adorning the park.”

The old saying still rings true: When it comes to real estate, it’s all about the neighborhood. This is yet another box Five Park checks off for its residents, with an artistically significant passage to some of the most beautiful parts of Miami Beach.

“A major component of the property will be the addition of Miami Beach Canopy Bridge, designed by world-renowned French conceptual artist Daniel Buren,” says DavidMartin, alsoadeveloperwiththe project. “The bridge will give pedestrians safe and easy access to cross the MacArthur Causeway. It will achieve long-term, overarching connectivity goals for the city, creatingacontinuous loop of access for all the South Beach neighborhoods. Five Park will be the new gateway to Miami Beach.”

With such an affluent group of buyers coming into the market, Strafaci says they crave exclusive lifestyle offerings. To that, Five Park offers a residents-only members area, The Canopy Club. Located on the building’s 26th floor, it’s outfitted with wellness and fitness accoutrement, a spa, private dining room, lounge and bar, along with a dedicated club-level concierge to personalize each experience.

The energy of Miami Beach is hard to beat, but South Florida encompasses a lot of land dotted with eye-catching neighborhoods for every personality and lifestyle.

Positioned in the arts and entertainment district of downtown Miami, Casa Bella is a soaring 57-story tower featuring 306 luxury residences. The lucky occupants will be treated to not only gorgeous views, but also the kind of five-star service and amenities these well-heeled city dwellers command.

Drive about 35 miles north up the coast through many gorgeous seaside communities, and you’ll arrive at the future home of The Ritz-Carlton Residences, Pompano Beach. Its two towers will each have their own perspective, either gazing over the beachfront or enjoying glistening marina views.

Beth Booker, owner of public relations and marketing firm Gracie PR & Marketing, was living in Charlotte, North Carolina, when the pandemic hit in 2020. Not more than six months later, in September of that year, she found herself buyingahome in Naples, Florida, over video chat, sight unseen.

“Southwest Florida has a very special place in my heart,” Booker says. “It’s whereIvacationed through my childhood, whereIwent to get my undergraduate degree and it’s where I got married. My mother decided to make it her permanent residence, my best friends are here and my in-laws are only a couple of hours away.”

When she and her partner arrived at their new home with their two young children in tow, it wasn’t long before they realized how many other people their age had the same idea. Florida is the place to be.

Dawn McKenna, founder and owner of the Dawn McKenna Group, first noticed a dramatic increase in young professionals’ interest in Naples back in 2016. This prompted her to open an office there a year later.

“Everyone wants to be near the Gulf or close to the town center,” she says. “They want amenities in their condos like workout rooms and food service. With single-family homes, they are looking for things like great outdoor space, pools, spas, putting greens, pizza ovens and boat access. The young professional buyers want new. They are not willing to live with an 80s, 90s or even 00s style.”

A palatial estate might certainly catch their eye. Premier Sotheby’s International Realty recently listed a five-bedroom, seven-bathroom Old Naples home for $14.9 million. It came to market after the owner decided to purchase a home in Naples’ exclusive Port Royal neighborhood. Proof the area is hard to leave, with residents regularly swapping luxury abodes for even more opulent comforts.

Back in Miami, Nathan Zeder of The Jills Zeder Group, affiliated with Coldwell Banker Realty, noticed a shift in his market not long after the pandemic started, in line with Booker’s relocation timeline.

“It began to open up in May and June of 2020 and by September or October there wasanoticeable shift in what I would call the ‘normal’ buyer profile,” Zeder says. “We would usually see the majority of buyers coming from out of state closer to a retirement age. The new buyer is significantly younger, consistently in their late 20s to mid-50s with young families and looking to relocate completely to Miami.”

Slightly ahead of the curve, Marc Lotenberg, CEO of Surface Magazine and Future Media Group, made the Florida migration from New York in March 2020. Having lived in Miami before, he was familiar with different neighborhoods in the city.

“Miami Beach is likeavillage,” Lotenberg says. “It’s a super tight-knit, family-oriented community — which was important to me as the father of two young children.”

Since then, many of his employees have also made the move to South Florida. While he admits the pandemic was limiting at first, Lotenberg feels that, in the long-run, it expanded opportunities for industries previously tied to the biggest metropolitan cities to operate from anywhere.

“What better place than a tropical paradise with no state income tax?” Lotenberg asks. “Top-tier finance, tech and media companies flocked to Miami, and of course the restaurant and hospitality players quickly followed suit. Right now, South Florida is the center of the universe; it’s the best place to build a brand or launch a new business, surrounded by elite talent from across the country thriving in 80-degree weather.”

It’s hard to argue with that logic. And with some of the country’s most sought-after developers creating homes with these high-net-worth individuals in mind, it feels likeawin-win for both sides.