A pair of twisting 20-story towers by Bjarke Ingels make up the 98-unit Grove at Grand Bay condominium project, set to be completed by Miami developer Terra Group by the end of the year. Located in Coconut Grove, the buildings will feature 12-foot ceilings and panoramic views of the nearby marina. Amenities include five pools (including two on the rooftop_, a pet spa service, a fitness center, and an art gallery.

For his firm’s first residential project in the U.S., renowned architect Rem Koolhaas of OMA devised this Coconut grove complex with his partner Shohei Shigematsu. The 5.2-acre parcel comprises three 20-story luxury towers and will also host a 3,500-square-foot eatery by Miami restaurateur Michael Schwartz and a sculpture park by Enea Landscape Architecture.

Ever wonder what is atop the glamorous buildings recreating the Miami skyline? Luckily, most of them feature jaw-dropping swimming pools with sweeping vistas that allow residents to feel they’re enjoying the water on top of the world.

Around every corner it seems there’s an opportunity for a dip. Yves Behar’s first serious foray into architecture has resulted in Centro’s 37th Floor rooftop pool being surrounded by inspired tepee lounges and lush living green walls. REM Koolhaas has utilized balance, minimalism and vision to create a space where the focus is as much on the unparalleled view as it is on the stunning pool. Bjarke Ingels topped the spiraling glass towers of Grove At Grand Bay with twin infinity pools, and over at Biscayne Beach, Thom Filicia is crafting their first private members-only elevated manmade “city beach” on the bay. Additionally, the two-story penthouses will feature eye-catching private rooftop pools with entertainment and relaxation areas. Atop Brickell House, Yabu Pushelberg’s 46th Floor rooftop pool continues his vision of refined cosmopolitan living with an expansive sundeck showcasing ocean vistas and bay views. Another standout is Luis Revuelta’s Brickell Flatiron rooftop that resembles a lavish cruise ship.

What's Miami without a bit of Cuban flair? The Florida city's rich Cuban influences are manifesting in an unexpected new collaboration between Renzo Piano'sEighty Seven Park residences and Cuban-American artist-and-designer couple Ruben and Isabel Toledo. In a partnership conceived by David Martin, president of Terra, the project's developer, the Toledos will create all branding and marketing materials for the full-service residences, from signage to staff uniforms.

"One of the biggest dilemmas for us in real estate is how do we create a lifestyle in a way that’s not contrived," muses Martin. "So we really view illustrations as art and something that sets an example and lets people connect with the product. At the end of the day, a home is the most important assets people buy, and they take pride in it, so we want to ensure each owner that every aspect is well thought out."

In defining a lifestyle for Eighty Seven Park, Martin thought it only natural to turn to the Toledos, longtime friends of his whom he had commissioned in the past to work on other properties. "The Toledos did the Miami City Ballet costumes for their production of The Nutcracker, and they have a great connection to the city, so it felt like the right fit."

Martin sees such a holistic approach to branding as a direction in which developers should be moving. "Design isn’t just the architecture; it’s all-encompassing," he says. "The more we can introduce collaborations and commissions, that elevates the brand and creates an emotional connection to the building."

The Toledo's artistic interpretation of this connection reference everything from the property's unique surroundings to the culture of Miami. "When we commissioned Renzo, he said he wanted people to feel like they were living inside a park," explains Martin. "So we have the beach to the south, and we created little two-acre parks to the north of the residences. This nature component is something that’s not typical. You're either in the park or on the beach, but you don’t usually get both. A lot of these illustrations reference that."

So far, Terra has released Ruben's illustrations; Isabel's uniform designs will be unveiled closer to the project's fall 2018 opening date. And we can expect to see more from the Toledos in future Terra buildings, too: Martin says he plans to try to incorporate them in every project going forward, favoring their analog creations to more sterile renderings. "Their art just kind of helps ground us more in this digital age, more so than this high-tech imagery that we’ve grown accustomed to."

AD spoke to the Pritzker Prize winner about the North Beach property, and how he designed the structure to look as if it floats above the sand and waves

For his first residential commission in the United States, Italian architect Renzo Piano wanted to defy gravity. The sleek, oval-shaped Eighty Seven Park in Miami Beach’s North Beach, seems to float above a vast, lush parkland—two acres of which is private to residents of the 68-unit building—and abuts the beach and sea.

“The building is made of 16 decks flying one above the other, floating above the beach and park. Those suspended decks catch the sound and light of the ocean. It’s a beautiful thing,” Piano tells AD. “I know fighting against gravity sounds a bit mad, but it is quite interesting because the tension between the sky and earth adds a poetic presence. It’s not arrogant, it’s not possessive, it’s not selfish. This building is something that is more open. What we are expressing is that this building belongs to nature.”

The residences range in size from 1,400 to 7,000 square feet, each with large terraces, floor-to-ceiling windows, and design details that echo North Beach’s natural landscape (think: shell, pebble, and seagrass elements), all intended to connect inhabitants to the outdoors. In terms of facilities, Eighty Seven Park features two pools with cabanas, a spa with a hammam, a juice bar and café, a wine bar, and a library.

The aforementioned two-acre private park, designed by Dutch landscape architecture firm West 8, is an added perk. Residents also have access to a 24-hour concierge, butler service, and even a staff botanist.

While Piano is perhaps best known for his cultural centers—he’s famously worked on the Whitney Museum of American Art in New York, the Harvard Art Museums in Cambridge, Massachusetts, and the Centre Pompidou in Paris, among many other commissions—the world of residential architecture is a growing field for the 82-year-old Pritzker Prize winner and his firm, Renzo Piano Building Workshop. He most recently completed 585 Broome SoHo in New York, in November 2019. 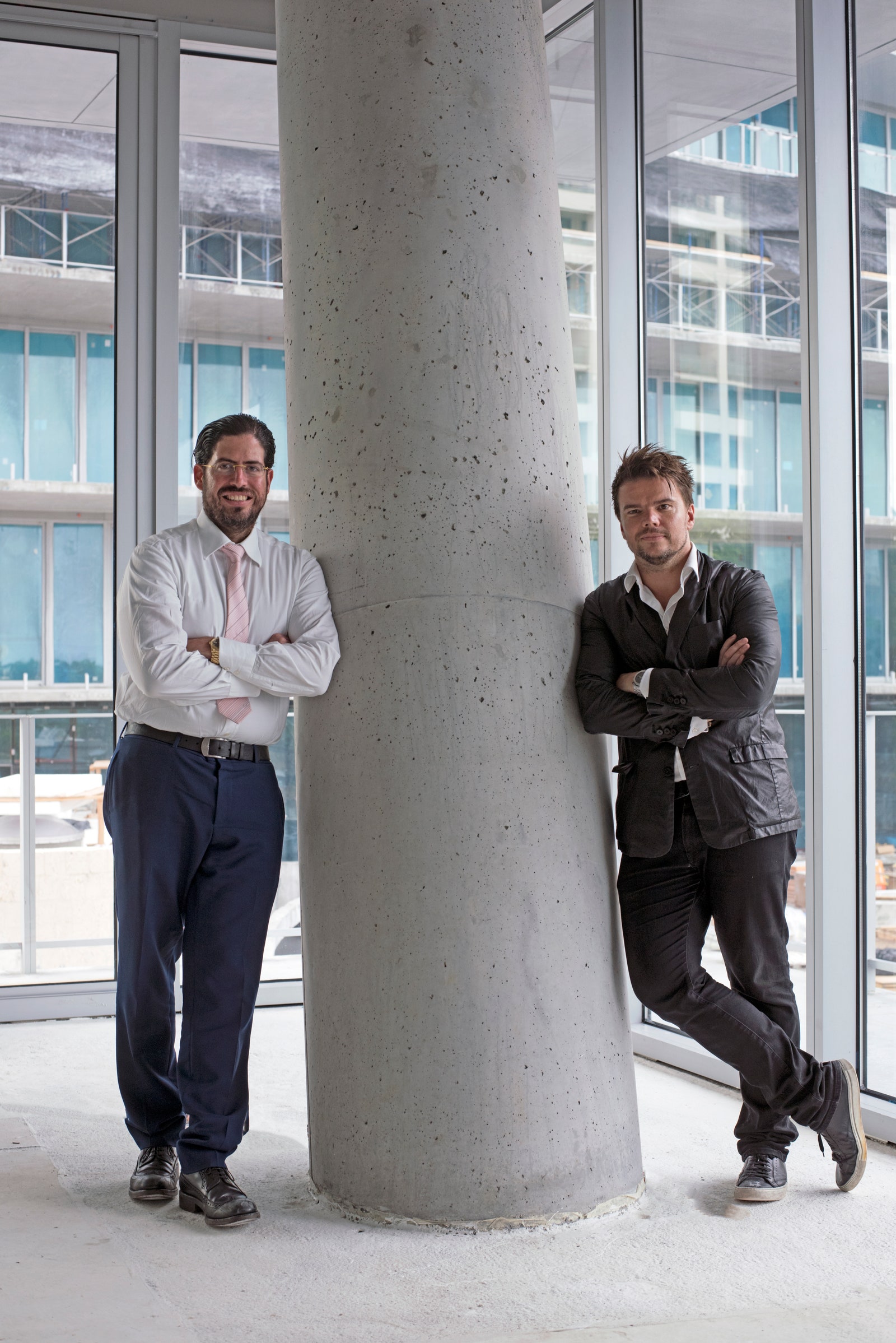 Grove at Grand Bay, as the property is known, was developed by Miami-based firm Terra and is completely sold out, save for the south tower’s $28 million full-floor penthouse. Set to become Florida’s first LEED Gold–certified residential tower, the project also boasts ultraluxe amenities including two rooftop pools (out of five pools total), a pet spa, and more than a million dollars of original artworks—with pieces by Olafur Eliasson, Tara Donovan, and Nathan Mabry. The lush three-acre grounds, meanwhile, were sculpted with over 15,000 plantings by local landscape guru Raymond Jungles. (Even more outdoor space can be found at the nearby Regatta Park, which unveiled a $6 million redesign last year.) Future residents are now permitted to take ownership of their units and begin interior build-outs, with move-ins slated for the fall.

rove at Grand Bay, as the property is known, was developed by Miami-based firm Terra and is completely sold out, save for the south tower’s $28 million full-floor penthouse. Set to become Florida’s first LEED Gold–certified residential tower, the project also boasts ultraluxe amenities including two rooftop pools (out of five pools total), a pet spa, and more than a million dollars of original artworks—with pieces by Olafur Eliasson, Tara Donovan, and Nathan Mabry. The lush three-acre grounds, meanwhile, were sculpted with over 15,000 plantings by local landscape guru Raymond Jungles.

(Even more outdoor space can be found at the nearby Regatta Park, which unveiled a $6 million redesign last year.) Future residents are now permitted to take ownership of their units and begin interior build-outs, with move-ins slated for the fall.